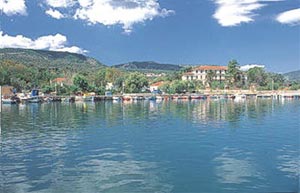 It is at a distance of 12Km away from he town of Mytilene, at the Eastern coasts of the island.

It’s an area full of olive groves and fertile land while there are wonderful beaches at the same time.

The inhabitants of Thermi are divided among four settlements: Pyrgi Thermis, sea-shore of Thermi where we find the thermal springs, the village of Thermi and the new settlement of the Saint Raphael’s Monastery.

The roots of the area’s history is lost into the centuries.

Archaeological excavation (1929-1933) at the area of “Kanoni”, have proved that it has been inhabited since the prehistoric period and a considerable

civilization had been developed as the area’s thermal springs played a positive role in the economic and the cultural development of the total area.

At the site of Pyrgi Thermis the visitor can admire the medieval church of Panayia Troulloti while the imposing existence of stone built towers will travel him back to the years of piracy. 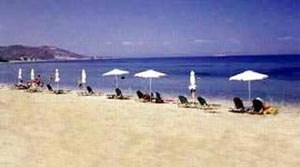 At the Northern there is a fantastic sandy beach with sand, called “Kanoni”, awarded with the "Blue Flag". Going on at Northern we meet a little port and the sea-shore of the area: traditional coffee-shops, fish-taverns beside the sea, the little church of Ayios Georgios,

the enjoyment of the sun-set at the paved queue, the stone-built windmill, elements that together compose a unique and indicative picture of the area’s natural beauty. 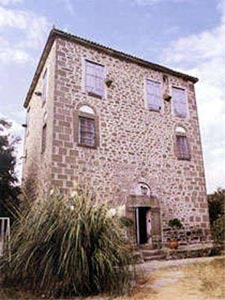 Also we meet the imposing hotel “Sarlitza Palace” which during days of welfare (beginning of the 20th century and later) offered accommodation and hospitality to Kings and Archbishops.

Behind the building of the hotel there is an archaeological site: the ruins of the ancient temple dedicated to Thermia Artemidos - proof of the area’s acme.

Our tours continues to the main settlement of the area, the village of Thermi: picturesque paved streets, the artistic building of the school, the traditional coffee shops, the perennial lilacs at the market, the medieval tower, the basilica built in 1843, the fountain of “cypress”. 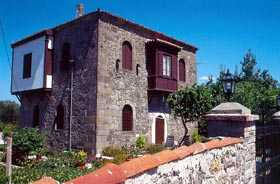 During the kingdom of Gatelouzi, at the rural areas close to Mytilini, the wealthy landowners of Mytilini had begun to construct houses with rustic characteristics.

The conditions of general insecurity and poverty led a lot of people to steal.

That is the main reason these houses are very well secured.

From this type of house results the particular Lesbian mansion, the most original construction we meet on Lesbos. 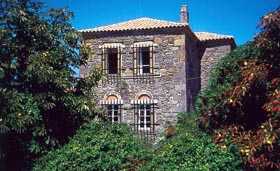 We meet this particular type of mansion in the surroundings of the municipality of Thermi, but mostly at the area of Pirgi Thermis, named after these buildings.

These houses are made of stone. They have three floors, small windows at the ground floor and at the first floor, for protection reasons and big windows with a view over the olive trees at the last floor.

The old mansions (like those that belong to M. Niania and to M. Karapiperi) are influenced by the Byzantine and Italian tradition. The original mansion, though, has been influenced by the ottoman architecture (wooden roof with protrusions - sahnisinia).

The Byzantine temple of Virgin Mary of Troullotis, is the older ecclesi 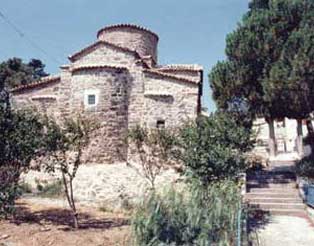 astical monument of Lesvos, and constitutes the limit between the present and the past of Thermi. Is built in the region of Thermi, on a hill and has the M.Asia as a view. It embelishes the region "Petralonia", where was found the ancient settlement of Thermi, which was named culture of Trojias.

The temple of Virgin Mary belongs to the after-byxantine period and is built in the type of simple dome cruciate temple, while it is included in the category of transient dome temples. Its architecture presents particular interest, despite the fact that in later season have become many bad interventions, what influenced the total picture of temple.

The exterior picture of temple is perfectly simple, influesed obviously from the minimal means of that season .Remarkable element is the least use of known decorative patterns of that era, and the use of keramics in the arches and in the windows.

The abbey of Saint Rafael, Nikolaos and Irene, is a monastery built forty years ago, but its history is bigger than eight centuries, and with foundations from the paleochristian era. 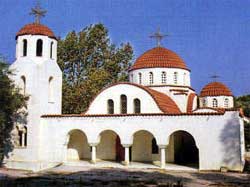 It was founded in 1963 in the area where was found Byzantine monastery, which however was destroyed completely by Ottoman soldiers 1463. the three Saints tormened at the raid of Ottomen, with a lot of residents of Thermi, which had found shelter in the monastery, after the local revolt that brought the rage of conquerors for revenge\

For more than 500 years the horrible facts of Saints martyr remained barried at the hill of Karies, where is found the abbey. They were revealed after five hundred years witha remarkable way, the discussion of himself Saints with residents of region, in which they revealed the history of abbey and their torments.

In very few years from his foundation, the monastery developed and became one from the most important adorations of orthodoxy, thanks to the miraculous action of Saint Rafael, which unfolds in entire world. 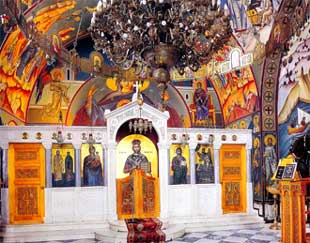 The abbey was founded officially in 1963, five hundred precisely years afterwards the Saints tornment. Its openings happened on 6 July 1969.

In the monasterial group there is also the temple of Saint Magdalini and the chapels of Saint Skepis of Virgin Mary, Saint Nektarios and Taxiarxii Micheal.

The picture of a simple faithful kneeled in front of the grave of Saint Rafael, is the most characteristic picture that may have a visitor while leaving the abbey, since the live and most intense,full of miracles, action of Saint gothers those who seek their salvation by various trials.

At Skala Thermi the historical baths have been in use since ancient times and was at one time the divine spring of the goddess Artemis. 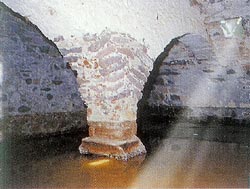 he mineral waters are also inhaled for chronic bronchial catarrh, catarrh of the pharynx and the eustachian tubes. The Grande old Hotel Starlitza which was the center of the community and had beautiful garde

ns has been deserted for years but plans for its restoration are under way.

Behind the relatively new bath house are the ancient baths now closed to the public but worth a visit. Skala Thermi itself has many large cafes near the waterfront as well as two excellent fish tavernas right at the fishing boat docks.

Kanoni area is famous about the numerous cafeterias, clubs and bars that are there.

The area is full of life, since the visitors come from the first morning hours, so as to have a cool coffee while they swim, or taste delicious plates in the evening or have a snack.

While the sun goes down, the rhythm of the music becomes louder, but without causing any troubles to the habitats of the area.